This unique blue Cyano Type print shows the Princely Beguinage Ten Wijngaerde is the only preserved beguinage in the Belgian city of Bruges. There are no more Beguines living there, but since 1927 it functions as a convent for Benedictines and a priory of Benedictine nuns.
Already before 1240 a community of pious women settled at the domain 'de Wingarde' (old Dutch for vineyard), in the South of the city. The beguinage was founded around 1244 by Margaret of Constantinople. In 1245 it was recognised as an independent parish.
The complex includes a gothic beguinage church and about thirty white painted houses dating from the late 16th to the 18th century.
The Beguinesand the Beghards were Christian lay religious orders that were active in Northern Europe, particularly in the Low Countries, in the 13th–16th centuries. Their members lived in semi-monastic communities but did not take formal religious vows.

Cyano Type blue print is a derivative of iron-silver print processes. Known since the middle of the 19th century it takes its name from the color of the final print. Cyano is a contact printing process that needs UV light to produce the image onto a piece paper. 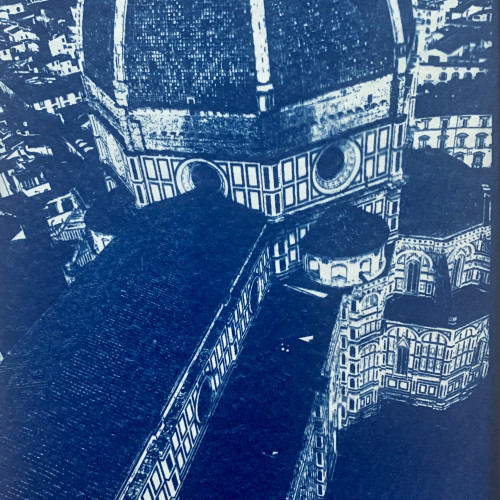 No Stock Available This Cyanotype shows a view from famous Giotto...

No Stock Available This Cyanotype shows a view from famous Giotto...